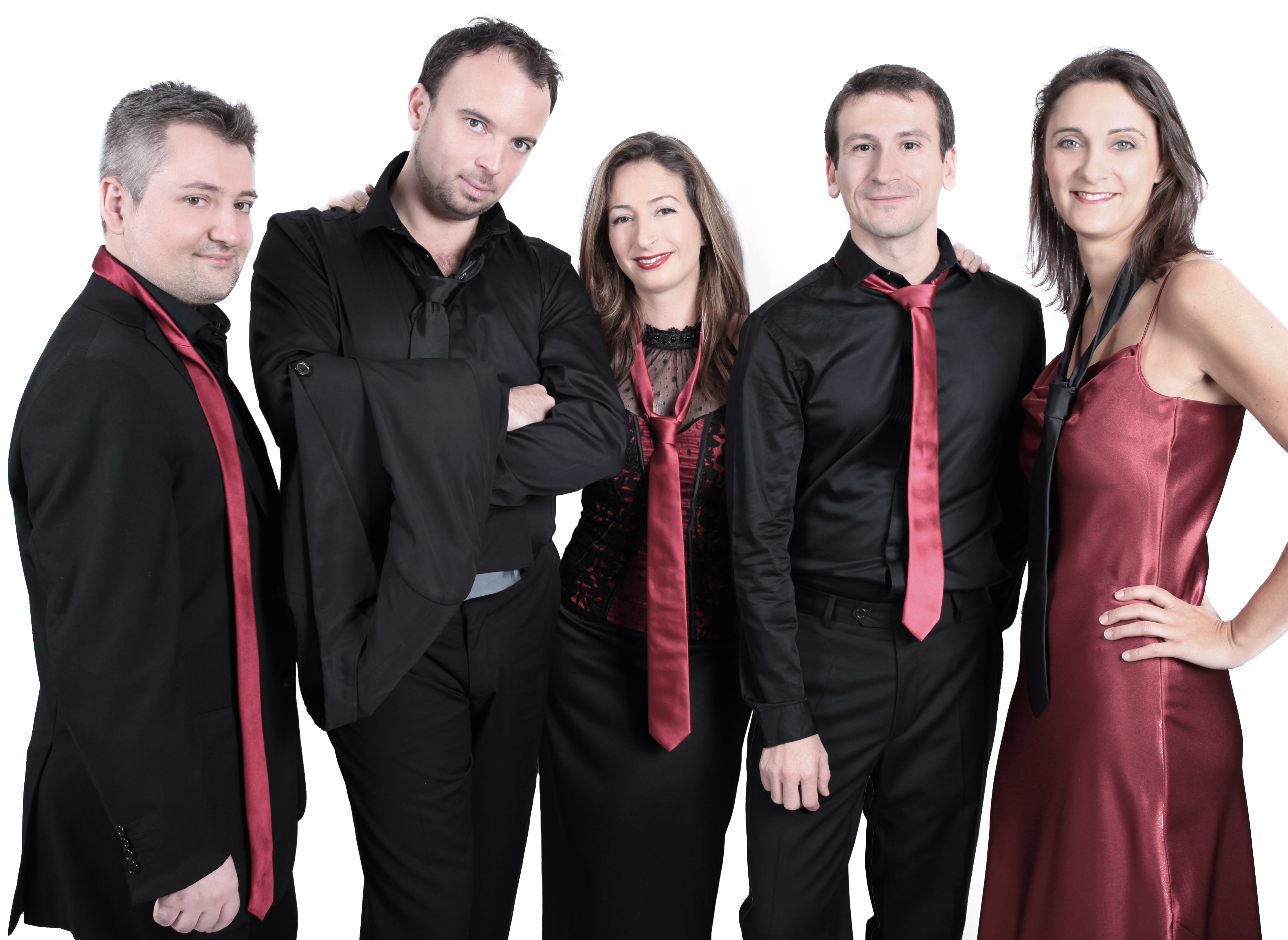 Syntonia was a Resident Artist of the Fondation Singer-Polignac from 2011 to 2016.

Syntonia stands apart in the world of chamber music. Created in 1999, the ensemble is currently the only piano quintet in France. It is composed of five musicians who lead parallel solo careers yet make the ensemble their priority, thus creating a dynamic, exacting and complicit unit.

Graduates of the Paris Conservatoire national supérieur de musique et de Danse in 2000; they won the Tina Moroni prize in the International Competition in Florence and did their first recording as part of the Déclic series (AFAA / Radio France) the same year. They have since performed in many prestigious festivals and concert venues, including : Roque d’Anthéron, Pâques à Deauville, Classique au vert at the Parc Floral, the Passerelle in Saint Brieuc, the Bouffes du Nord, the Cité de la Musique, the Capitole in Toulouse, the Grands Concerts in Lyon… Radio Classique frequently schedules them; France Musique is a partner of their records and has aired several of their concerts. They are also regular guests on many radio programs.

Their 2007 disc devoted to Schumann and Franck’s quintets was the fruit of a common vision that had been developed over time and was awarded the ‘Diapason découverte’, as well as 4 stars from MDLM. In September 2010, their version of the Franck quartet caused a stir by winning the Tribune des Critiques on France Musique. Their new Dvořák & Suk's piano quintets CD was released early 2014, and is also acclaimed by both press and public. They share their love for chamber music with a number of regular and occasional collaborators, including : Richard Galliano, Jean-Marc Phillips-Varjabedian, Henri Demarquette, François Salque, le Quatuor de Crémone… Their program the Salons de Musique#6 alongside violinist Sarah Nemtanu and produced by Sombrero & Co and Arte Live Web, attracted a large number of viewings on the channel’s website.

Syntonia has developed a marked interest in contemporary music: the musicians have notably worked in close collaboration with Henri Dutilleux, Jacques Boisgallais, Nicolas Bacri, Edith Canat de Chizy, Olivier Greif, Benoit Menut. Their encounter with Olivier Greif in 2000 was a landmark moment. They premièred his String quartet Ulysses, then recorded it at Triton two years later. In 2010, ten years after his death, they commemorated him with two new recordings, comprising of all his music for piano and violin as well as his 2nd quartet for voice and his sonata for two cellos. These discs were enthusiastically received by the specialist press (5 Diapasons, 4 Stars awarded by Classica). They also feature on the 12 DVD box set Les incontournables d’Olivier Greif (2013, ABB Reportages), which was awarded a Diapason d’or.

The ensemble will also feature in the educational project 10 months of School and Opera in 2014, run by the Opéra National de Paris, a unique programme aimed at students in priority education schools and who do not have much access to art and culture.