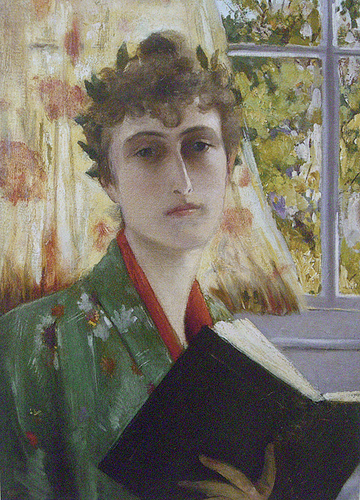 Winnaretta Eugénie Singer was born in Yonkers, New York, in 1865. Her father was Isaac Merritt Singer, the American industrialist who improved the sewing-machine. He was married to a young French woman, Isabelle Eugénie Boyer. Winnaretta was the twentieth out of the twenty-five children Isaac Singer had.

Winnaretta only spent the first two years of her life in New York. Once his business went successful, Isaac Singer and his family moved to Paris in 1867. Three years later, the Franco-Prussian war was on its way and the Singer family decided to move to England. There, Isaac Singer built a huge property in Paignton (Devonshire) that he called The Wigwam. This fabulous residency gathered more than a hundred rooms. Isaac Singer loved hosting theatrical performances, a passion that Winnaretta shared. He died during the summer of 1875 at the age of 64. Isabelle Singer went back to Paris with her children. She remarried with Victor Reubsaet, Duke of Camposelice. Now a Duchess, she bought a private mansion on the avenue Kléber. She was only 36 and was considered as a very beautiful woman. Some still say that Frédéric Bartholdi asked her to be the model of his Statue of Liberty. The “grand salon” (large lounge) of her mansion became the stage of numerous artistic and musical gatherings where famous musicians came to play Beethoven, Mozart and Schubert. Winnaretta shared the passion of her mother for music. According to her memoirs, she studied the piano and attended most of the concerts her family hosted. For her fourteenth birthday, the only present she asked for was a performance of her favorite Beethoven’s quartet, the opus 131. The young lady was already showing a deep love for music.

Winnaretta used to study painting with Félix Barrias and was a regular at Manet’s studio. She was an accomplished painter. She spoke French as well as English. She was asked by the Louvre's direction to participate in the realisation of the English catalog in 1882. Although, music had always been her favorite subject. In 1880, she met the pianist and composer Gabriel Fauré while staying in the familial holiday home in Normandy. They became friends immediately. Isabelle Singer brought her daughter to the Bayreuth Festival in Germany to attend Wagner’s Parsifal representation. This experience was the starting point of Winnaretta’s passion for Wagner.

In 1877, two years after Isaac Singer’s death, the various succession problems were solved and Winnaretta inherited $167.000 from the personal account of her father. She also inherited more than $50.000 in cash and $610.000 in stocks from the sale of the Singer Sewing Machine Company. According to his will, the Wigwam property in Devonshire was also bequeathed to Isaac Singer’s children. The young Winnaretta was then a wealthy heiress.

In 1887, Winnaretta’s mother arranged a marriage for her daughter with Prince Louis de Scey Montbéliard. Unfortunately, this union did not work and it remained unconsummated after four years. Winnaretta asked the Court of Rome for the annulment of her marriage. A few months before her wedding, she had bought a private mansion on the avenue Henri Martin in Paris where she could invite her musician friends in a wooden room used as her painting studio (her atelier) by day but also as a music venue by night. There, Vincent d’Indy, Emmanuel Chabrier, Ernest Chausson and Gabriel Fauré were the first to play and create some of their famous works. While waiting for the Pope’s decision, Winnaretta went to Venice and rented a Palazzo on the Grand Canal where she invited some of her Parisian friends.

The Vatican officially nullified the marriage between Winnaretta Singer and Prince Scey de Montbéliard on the 1st February 1892. At the end of the year, Robert de Montesquiou and his cousin, the countess Elisabeth Greffuhle, encouraged Winnaretta to marry again in order to find a respectful position in the aristocratic society. They chose the perfect man for her amongst their friends: Prince Edmond de Polignac. He was a fifty-nine year old bachelor who had studied in the Conservatory of Paris and was keen on music composition. Winnaretta and Prince de Polignac got married in December 1893. They both shared a love for arts - especially Monet’s works - and for music. They started to host some music gatherings where several famous personalities from arts, literature and science came together. Their salon de musique became one of the most vibrant places to attend in Paris. But Edmond had a fragile health and died in 1901 at the age of 67. The princess was very affected by the loss of her husband who was also her best friend.

A LIFE DEDICATED TO MUSIC

In 1904, she wished to renovate her mansion. She called in the architect Henri Grandpierre to build a new building with a bigger salon de musique where she could gather a little chamber orchestra and two hundred guests. With two music venues, her musical activities grew. She paid tribute to her late husband by organizing concerts where his works were played. The salon of this new mansion was dedicated to concerts with orchestras or famous artists, whereas the atelier was used for intimate musical evenings. Known as “Aunt Winnie”, the princess hosted more than twelve concerts a year where the whole artistic and aristocratic worlds melted. Her musical expectations were high and her salon was the stage of new creations.

THE LAST YEARS IN ENGLAND

When Winnaretta’s younger brother died in August 1939, she went to England to attend the funerals in Torquay. Then, she decided to stay a little longer in order to visit some friends. In September, England and France declared war on Germany. In her letters to Nadia Boulanger and Francis Poulenc, the princess said she would stay in England for a while. She settled in Devonshire where she had spent her childhood. There, she helped organize some charity concerts in favour of the Red Cross. In 1940, she moved to London. Even if she expressed the desire to come back to France in some of her letters, Winnaretta was unable to cross the Channel during the war. Her health seriously started to deteriorate in 1943 although she kept participating in cultural events. During those years in England, she became friends with the tenor Peter Pears, the writer Stephen Spender, the composers Benjamin Britten, Lennox Berkeley and Gerald Berners. She died from a heart-attack on the 26th November of 1943. She was buried in the family crypt in Torquay. For the first anniversary of her death, the french newspaper Le Figaro published an article in her memory, mentioning the fact that the war and the pressure put on journalists at that time prevented them from writing sooner the tribute she deserved.