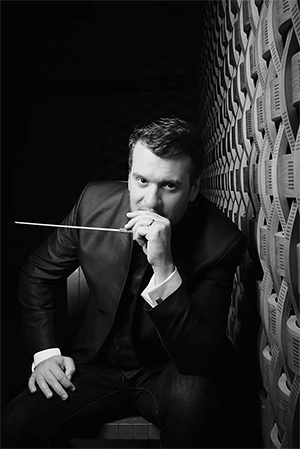 Performances of Mozart’s last three symphonies that have the bite and brio of French conductor Mathieu Herzog are much harder to find. WDXR NEW YORK

“ Absolute artist ”, and “ a true musician” are words frequently used to describe the conductor, composer and orchestrator Mathieu Herzog.

His musical soul was shaped through working under the guidance of great masters such as Semyon Bychkov, Daniel Harding, Gábor Takács-Nagy, György Kurtäg, Menahem Pressler, Alfred Brendel, and Mitsuko Uchida.

Mathieu has recorded numerous discs for labels such as Warner Classics, EMI, SONY, and Deutsche Grammophon. These recordings received worldwide critical acclaim and were awarded the “Diapason d’Or”, the “Choc du Monde de la Musique”, and Gramophone’s “Recording of the Year”, to name just a few.

In 2015, Mathieu founded Appassionato, an orchestra which radiates chamber playing in every one of its performances. Mathieu has formed a passionate and ever-evolving relationship with this ensemble, and together, they recorded the last three W.A. Mozart symphonies for the label Naïve.

In 2021-2022, he founded Appassionato le Label in partnership with Naïve and recorded two further discs, exploring the music of C. Saint-Saëns and the post-Romantic works of R. Strauss, A. Schoenberg, and O. Respighi.

Mathieu Herzog is also an associate artist of the Seine Musicale, for which he has launched “Vous trouvez ça classique?” (lit. “Do you think this is classical?”), which is aimed at helping new audiences listen to and experience classical music in a new way.

Alongside his work as a performer, Mathieu is also an accomplished orchestrator and prolific arranger, whether it be for Appassionato, for classical musicians such as Philippe Jaroussky and Natalie Dessay, and for vocalists across other genres, for example Stacey Kent and Luz Casals. Passionate about literature and history, Mathieu is also currently working on a libretto based on the life of Georges Bizet.

In 2019, Mathieu was appointed Musical Director of the Blaricum Music Festival Orchestra (The Netherlands).

Highlights of the 2021-2022 season include guest appearances conducting the Orchestre Philharmonique de Radio France, the Korean Symphony Orchestra, and the Kansai Philharmonic Orchestra (Japan) to name just a few.