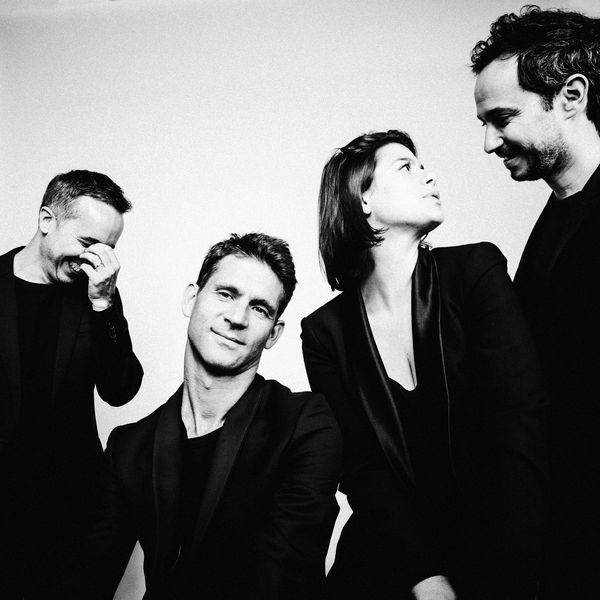 has been in residency since 2006, became Associate Artists in 2012

“A string quartet that can easily morph into a jazz band,”

wrote the New York Times after a 2009 performance by the Quatuor Ebène. The ensemble opened with Debussy and Haydn and then improvised on a film music theme—with exactly the same enthusiasm and passion.

What began in 1999 as a distraction in the university’s practice rooms for the four young French musicians has become a trademark of the Quatuor Ebène, and has generated lasting reverberations in the music scene. The four breathe new life into chamber music through their consistently direct, open-minded perspective on the works. Regardless of the genre, they approach the music with humility and respect. They change styles with gusto, and yet remain themselves: with all the passion that they experience for each piece, and which they bring to the stage and to their audiences directly and authentically.

There is no single word that describes their style: they’ve created their own. Their traditional repertoire does not suffer from their engagement with other genres; rather, their free association with diverse styles brings a productive excitement to their music. From the beginning, the complexity of their oeuvre has been greeted enthusiastically by audiences and critics.

After studies with the Quatuor Ysaÿe in Paris and with Gábor Takács, Eberhard Feltz and György Kurtág, the quartet had an unprecedented victory at the ARD Music Competition 2004. This marked the beginning of their rise, which has culminated in numerous prizes and awards.

The Quatuor Ebène’s concerts are marked by a special elan. With their charismatic playing, their fresh approach to tradition and their open engagement with new forms, the musicians have been successful in reaching a wide audience of young listeners; they communicate their knowledge in regular master classes at the Conservatoire Paris.

In 2005, the ensemble won the Belmont Prize of the Forberg-Schneider Foundation. Since then, the Foundation has worked closely with the musicians, making it possible for them – since 2009 – to play priceless old instruments from private collections. The quartet was one of the award winners of the Borletti-Buitoni Trust in 2007 and received support from BBT between 2007 and 2012.

The Quatuor Ebène’s CDs, featuring recordings of music by Haydn, Bartók, Debussy, Fauré, Mozart and the Mendelssohn siblings have won numerous awards, including the Gramophone Award, the ECHO Klassik, the BBC Music Magazine Award and the Midern Classic Award. Their 2010 album “Fiction” with jazz arrangements, has only solidified their unique position in the chamber music scene, as well as their 2014 crossover CD “Brazil,” a collaboration with Stacey Kent, and their recent recording with Michel Portal, „Eternal Stories“ (Mai 2017). In fall 2014, Erato released „A 90th Birthday Celebration“, a live recording (on CD and DVD) of Menahem Presslers birthday celebration concert with the Quatour Ebène in Paris. In 2015/2016 the musicians focussed on the genre of the „Lied“. They collaborated with Philippe Jaroussky for the CD „ Green (Mélodies françaises)“ which won the BBC Music Magazine Award 2016 and published a Schubert CD. On the one hand, it includes Lieder, recorded with Mathias Goerne (aranged for string quartett, baritone and bass by Raphël Merlin) and on the other hand, the string quintett, recorded with Gautier Capuçon. The CD „Round Midnight“ in collaboration with Antoine Tamestit and Nicolas Altstaedt will be released in the fall 2017.

The fundamental classical repertoire for string quartet will remain a cornerstone: this season, the Quatuor Ebène will focus on Ludwig van Beethoven’s String Quartets. The quartet will indeed present the complete Beethoven cycle in 2020 for their 20th birthday as well as for 250th birthday of the composer.

The 2017/2018 season will see the Quatuor Ebène perform at the Berliner Philharmonie, the Palais des Beaux-Arts in Brussels, the Philharmonie de Paris, the Wiener Konzerthaus, Stockholms Konserthus and Carnegie Hall New York (inter alia) as well as in festival venues such as the Musikfest Bremen and the Verbier Festival.