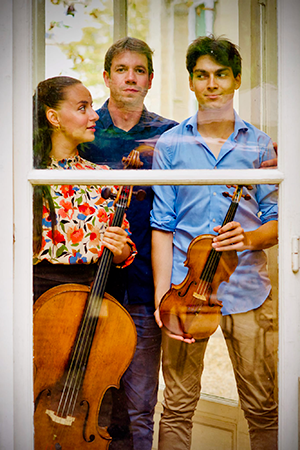 Trio Metral used to be composed of two brothers and their sister. Now, the trio is formed of its founder member Victor Metral (piano), Nathan Mierdl (violin) and Laure-Hélène Michel (cello). All three musicians are passionate about the chamber music repertoire and are, as individuals and as a trio, the winners of several competitions, especially the Joseph Haydn International Competition of Vienna in 2017.

The three musicians studied in Paris and Lyon conservatoire and were respectively the students of Yan Chiffoleau (cello), Roland Daugareil (violin) and Michel Dalberto (piano). Together, they followed the teaching of Claire Désert, Amy Flammer, Yovan Markovitch and François Salque with whom they had their Masters degree at the Paris conservatoire. Later, they got their doctorate as “concertists” under the supervision of Michel Dalberto. The residencies of the trio at the European Chamber Music Academy, the Queen Elisabeth Music Chapel and ProQuartet allowed the young musicians to meet great mentors like the members of the Belcea Quartet, Gary Hoffman, Krzystof Chorzelski, Aveis Kouyoumdjian, Johannes Meissl and Alfred Brendel. They participated in master classes given by Wanderer Trio, Ysaïe Quartet, Ebene Quartet and Renaud Capuçon.

The first CD of the trio, dedicated to Mendelssohn (Aparté), was very positively welcomed by the critics, and was complimented by Marta Argerich. The second one, recorded at Metz Arsenal (France), presents Chostakovitch and Weinberg trios. It was the first CD of a new collaboration with the label La Dolce Volta. This CD was also praised by the international press such as Diapason, Classica, The Strad, The Violin Channel, The Classical Review, Le Monde…

Trio Metral is very regularly invited to play on french radios (France Musique, Radio Classique). The musicians already performed on the stage of famous european venues, such as La Cité de la musique in Paris, Konzerthaus and Musikverein in Vienna, Royal Albert Hall in London… and were invited to play for prestigious french festivals as La Roque d’Anthéron, Folles journées de Nantes, Pablo Casals and Jeunes Talents in Paris, but also in Italy, Belgium and Morocco.

The three musicians are currently preparing their new album, dedicated to french music with Ravel and Chausson trios. It will be out on Spring 2023 (La Dolce Volta).