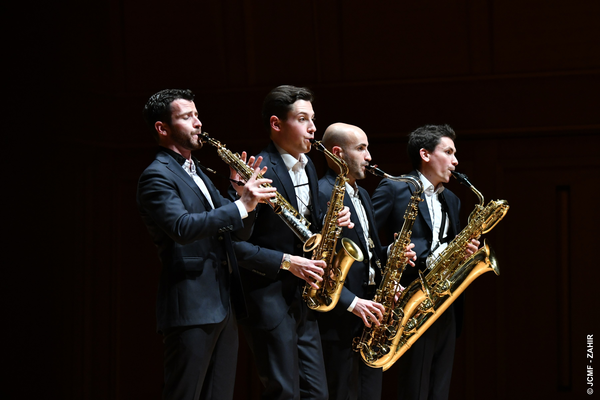 Has been in residency since 2019

An arising idea, an unexpected encounter and all of a sudden, it all becomes clear. This is the whole essence of Zahir, the Arabic word for «what is apparent, obvious» or something that, once unveiled, is omnipresent in our mind.

Born in 2015, this young ensemble has been playing in many festivals, in France and throughout the world. It is though in 2017 that Zahir Quartet stands out winning the first prize of the 9th Osaka International Chamber Music Competition (Japan), earning an international recognition. They have been ever since invited to prestigious venues such as London’s Wigmore Hall, the Philharmonie de Paris, the Folles Journées de Nantes, Montpellier’s Festival de Radio France,Festival des forêts, Festival de Sully, l’Acropolis de Nice and Tokyo’s Toppan Hall.

Currently in a residency at the Singer-Polignac Foundation, Zahir Quartet is also the 2016 FNAPEC International Chamber Music Competition laureate. The four musicians have won the first prize at the 2020 Vienna International Music Competition and at the Berliner and Manhattan editions as well. They have been supported by pianist Jean-François Zygel since they participated in «La Boîte à Musique», a French television show.

Sharing the same artistic sensibility, a sharp thoroughness and the will of renewing the musical scenery: these are the reasons that brought the ensemble together. Like Paulo Coelho’s hero in Zahir, the four saxophonists are very committed into pushing forward the quartet genre. The musicians underline a strong curiosity and creativity performing an original repertoire, thanks to their meeting with many composers such as Alexandros Markeas, Alexis Ciesla and Nicolas Fox and collaborating with a lot of artists like Jean-Charles Richard, Adèle Charvet, Jean-Denis Michat, Les chanteurs d’oiseaux...

This saxophone quartet rules out the competition with their boldness, the freedom of their gesture, a natural and flexible virtuosity, their artistic style, their bright commitments... The colour and the roundness of their tone is mesmerizing. Wonderful complicity from the beginning to the end.