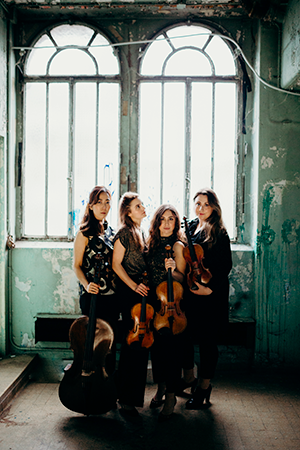 Has been a resident artist since 2021

The Quatuor Mona has been praised by ClassiqueNews for having “an unmatched energy in the string quartet genre. The communication is so alive and beautiful to watch, they generously give the audience access to all the splendors of the score.”

The quartet world has never before seen such a diverse group of young women. They represent the unity of Japanese, French, Israeli, American, Chinese and German backgrounds and have thus created their own universal language. Breaking ground in the classical music scene, the quartet is also the first all-female quartet to join the prestigious New Generation Artists roster at BBC Radio 3 in London for the 2021-23 seasons.

Bertrand Boissard from Diapason praised the quartet for their interpretation of Germaine Tailleferre’s Quartet: “impelling a great dynamism to this simple fantasy, all in doing justice to its flexibility, its tender lyricism and its furtive shadows. With a convincing style and plenty of vitality: do not lose sight of the Monas.”

Tristan Labouret from Bachtrack described how “the four musicians knew how to vary the characters and circulate the different energies, passing with ease from the delicate lace of the central movement to the roughness of the finale.”

Founded in 2018 at the Conservatoire National Supérieur de Musique de Paris, the Quatuor Mona immediately established a presence in the French capital performing at such venues as the Pierre Boulez Hall at the Philharmonie de Paris, the Petit Palais, Salle Cortot, Radio France’s Studio 104 as well as being featured on “Générations France Musique.” In 2020, they were selected among the most promising young quartets from the world to perform at the String Quartet Biennale at the Cité de la Musique.

In the 2021/22 season, you can look for the quartet at the Elbphilharmonie Hamburg, the Brucknerhaus Linz, the Biennale de la Philharmonie de Paris, the Philharmonie de Luxembourg alongside Jean-François Zygel, Icking Festival, and the Concerts de Poche with the Quatuor Modigliani.

Mesmerised by their talent after their debut at Musique à Flaine, the pianist and composer Abdel Rahman El Bacha dedicated his piece “Prélude à cordes” to the young quartet and invited them to perform at the Royal Theatre in Brussels, broadcasted live on Musiq3 during the Classissimo Festival.

The quartet is new to the competition scene but has already won prizes at the Philharmonie de Paris’ 3rd Annual Tremplin as well as the Prix de l’Orangerie de Sceaux and the Prix du Méjan from their time at the Festival Ravel.