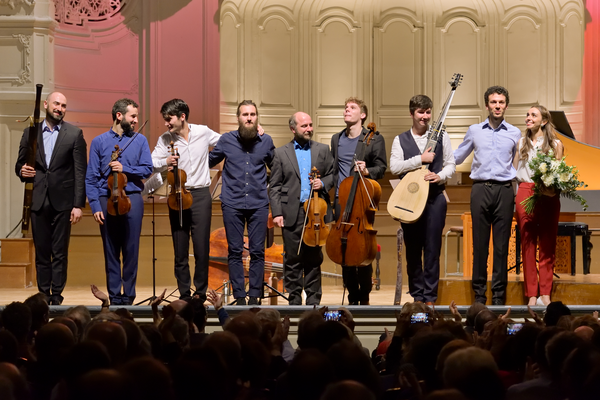 has been a resident artist since 2020

“With Jupiter, I wanted to bring together a group of exceptional musicians from the new generation, encountered while working with a large number of ensembles.

All of the artists invited to take part in the project are brilliant masters of their instruments, and some of them are already renowned soloists. The great freedom that they have all acquired during their projects, the choices in their explorations and a shared knowledge of music will mean we can perform the various repertoires in question with passion, power and emotion.

Ancient music has experienced a great period of rediscovery, thanks to such pioneers as William Christie, Philippe Herreweghe, or Jordi Savall, with whom I have been fortunate enough to work. It is now our responsibility, as a generation who grew up with this music, to continue bringing it alive, while making it more modern, showing just how accessible it can be, and how much it touches our hearts.

Listening, improvisation and energy, as well as a shared overall vision, will all be key factors. All our past experiences, as well as our group work with Jupiter, will allow us to gain a greater freedom, which will make this music utterly alive and, I hope, touching.”

Born in Paris in 1988, Thomas Dunford discovered the lute at the age of nine, thanks to his first teacher Claire Antonini. He completed his studies in 2006 at the Conservatoire de Paris (CRR), when he obtained a unanimous 1st Prize with honors in the class of Charles-Edouard Fantin. He continued his studies at the Schola Cantorum in Basel with Hopkinson Smith, and participated in several master classes with artists the caliber of Rolf Lislevand Paul O’Dette and Julian Bream.

From September 2003 through to January 2005, Thomas gave his first performances playing the role of the lutenist in Shakespeare’s Twelfth Night on stage at the Comédie française. Since then, Thomas has played recitals in particular in New York’s Carnegie Hall and Frick Collection, London’s Wigmore Hall. He made numerous solo or ensemble appearances in the most prestigious European festivals including Ambronay,nBozar, La Chaise-Dieu, Nantes, Saintes, Utrecht and many others.

Thomas Dunford’ first solo CD Lachrimae recorded for the French label Alpha in 2012, was unanimously acclaimed by critics and was awarded the Caecilia prize of 2013. His second CD « Labirinto d’Amore » was awarded the « Choc » from Classica magazine. His extensive discography is also the result of various collaborations with other musicians, singers and ensembles.

In 2018, at the age of thirty, Thomas Dunford created his own ensemble: Jupiter, to which he invited all the musicians who had marked his career and with whom he wanted to lead a musical adventure as much as a friendly one.