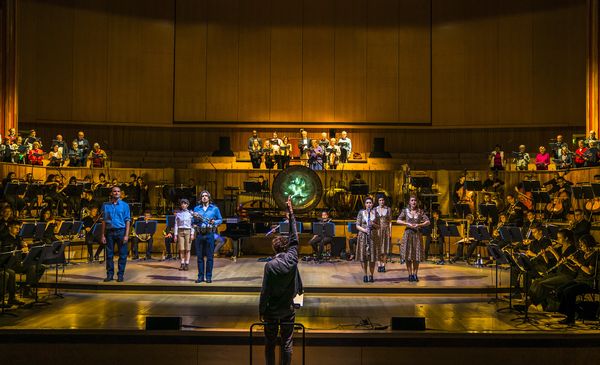 Has been in residency at the Fondation Singer-Polignac since 2010. Became Associate Artist in 2016.

Founded in November 2008, Le Balcon is a flexible amplified orchestra. Composed of a wide range of artists: soloist singers, more than thirty musicians, composers and sound engineers, Le Balcon extends with video makers, directors and choreographers depending on its projects and productions. Le Balcon produces crossover shows, from modern music to the classical repertoire, including contemporary music’s most disturbing experiences. Le Balcon defines a specific musical action, getting rid of the boundaries between the audience and the artists. Amplifying the orchestra is part of our vision of a musical show, which has to be a radical and striking experience for the audience. This idea of a global show comes from our generation’s natural assimilation of the loudspeaker and cinema, but also mostly from Wagner’s and Stockhausen’s operas. Le Balcon’s artistic committee unites musical director Maxime Pascal, sound engineer Florent Derex, composers Juan-Pablo Carreño and Pedro Garcia-Velasquez and pianist and singing coach Alphonse Cemin. While moving towards/embracing the new generation, confronting musical genres and developing its penchant for new technologies and contemporary music, Le Balcon was soon noticed by important members of the musical society. This has lead to work with composers such as Pierre Boulez or Michaël Levinas; while bonding with young artists of its own generation such as Marco Suarez-Cifuentes and Arthur Lavandier, composers, Benjamin Lazar, director, and the moviemaker Nieto. This singular vision led Pierre Boulez and Pierre Bergé to join Le Balcon’s honorary committee.

Delving into the lyrical repertoire led Le Balcon to do an artistic residency at the Athénée Louis-Jouvet Theatre in 2013. Starting with Richard Strauss’ Ariadne auf Naxos opera, the collaboration with the Athénée Louis-Jouvet Theatre witnessed the development of many shows in 2014 and 2015, including Peter Eötvös’ Le Balcon opera, based on Jean Genet’s libretto, Salvatore Sciarrino’s Lohengrin and Gérad Grisey’s Les Quatre chants pour franchir le seuil with soprano Julie Fuchs. In summer 2016, Le Balcon started a series of recording sessions with H.Berlioz’s Symphonie Fantastique, musical arrangement by Arthur Lavandier. The creative process has been continued with the creation of Arthur Lavandier’s second opera, co-producted with the Opéra de Lille, in fall 2016.

During the season 2018/2019 Le Balcon will make his debuts in great venuas as Opéra Comique, Opéra de Bordeaux, Southbank Centre of London with the opera cycle Licht by K. Stockhausen.