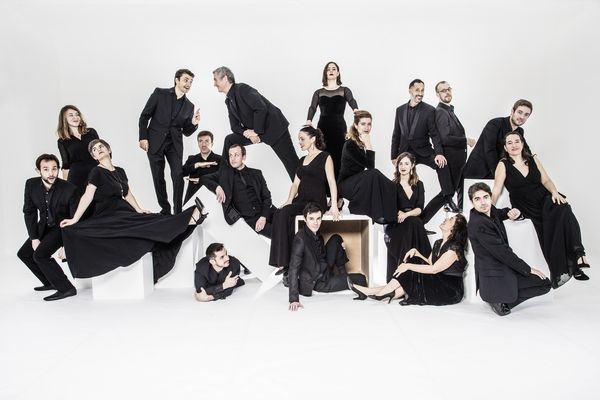 has been Associate Artist since 2014

The vocal timbre of the Ensemble Aedes engages the entire body, whence flows its dramatic and deeply lyrical expressivity.

Rigour and fervour are the magic ingredients of the mutual confidence which exists between the Ensemble Aedes’ 17 singers and their founder and director Mathieu Romano.

The Ensemble Aedes works regularly with such prestigious groups as the Orchestre de Paris, Les Siècles, Les Musiciens du Louvre, the Orchestre National de France and Orchestre Philharmonique de Radio France and the Latvian Radio Choir.
Artist-in-residence at the Théâtre Impérial de Compiègne and the Cité de la Voix in Vézelay, the Ensemble Aedes has performed in many prestigious venues – the Philharmonie de Paris, the Théâtre des Champs-Élysées, the Royal Opera of Versailles, the Bordeaux Opera, the Paris Opera, the Opera Comique, Vienna Konzerthaus – and at the Aix-en-Provence, Chaise-Dieu, Besançon, Radio France Montpellier and Grenada festivals.

In 2019 Aedes has been invited to the Paris Opera for 18 performances of Stravinsky’s Les Noces.

It is the extreme and much-acclaimed clarity and precision of the Ensemble Aedes which makes the texts of the poetry we sing accessible to our audiences. French music naturally has pride of place, the ensemble’s cornerstone being the a cappella repertoire of the 20th and 21st centuries.

The Ensemble Aedes follows its own particular pathway within this vast repertoire, constantly revitalising its approach through a series of original partnerships. The particular aim of the programme NIGHT(S) is to give a cappella singing a multi-sensorial aspect.

Conductor Mathieu Romano works within all genres from the Baroque to the contemporary, both on the concert stage and in opera.

He trained at the Conservatoire national supérieur de musique et de danse de Paris under Zsolt Nagy, and guests as François-Xavier Roth, Pierre Boulez and Susanna Mälkki. His experience then led him to work as assistant conductor with François-Xavier Roth, Paul Agnew and Marc Minkowski. He was also assistant to the Orchestre Français des Jeunes for three years with David Zinman and Dennis Russell Davies.

Mathieu Romano has worked with ensembles such as the RIAS Kammerchor, the Latvian Radio Choir and the Netherlands Kamerkoor, operatic productions with Les Frivolités Parisiennes and contemporary projects with Ensemble Itinéraire. He also works with Les Siècles, Normandy Regional Orchestra and the Sinfonia Varsovia.

He regularly appears with Ensemble Aedes, of which he is the founder and artistic director, and is invited to the Philharmonie de Paris, Théâtre des Champs-Elysées, and festivals such as Festival d’Aix-en-Provence and the Rencontres musicales de Vézelay. His discography includes a number of acclaimed releases devoted to choral repertoire.

A passionate advocate of music education and accessibility, for children, amateurs and talents of tomorrow, he leads different youth orchestras and educational projects.