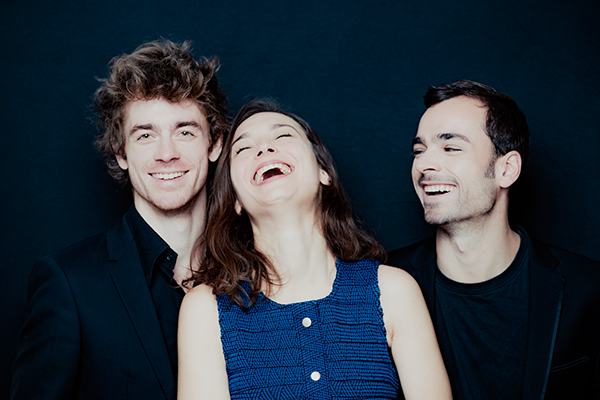 Has been Resident Artist since 2021

Surrounded by Chamber Music since their youngest age, Camille Fonteneau (violin), Raphaël Jouan (cello) and Alexis Gournel (piano) have been exploring with passion the diverse repertoire for piano trio. After meeting at the Conservatoire National Supérieur de Musique et de Danse of Paris, they founded the Hélios Trio in 2014.

They have had the opportunity to play in different venues such as the Philharmonie de Paris, Salle Cortot, the Lyon Opera House, and the Phoenix Hall in Osaka. They are regularly invited to numerous festivals such as the Festival de la Roque d'Anthéron, the "Folles Journées" (Nantes, Tokyo, and Warsaw), Festival Pablo Casals in Prades, Rencontres Musicales d'Evian, Festival d'Auvers-sur-Oise, Festival de Beauvais… They have been invited to perform during the live radio show "Générations France Musique", and have been "Ensemble en résidence" at the Festival de la Roque d’Anthéron in 2015 and 2016 and at the Festival des Arcs from 2016 to 2018. In 2016, the composer Patrick Otto dedicated his piece "Orients" to them. The same year, they perform for the first time Beethoven's Triple Concerto which they have played several times since then with orchestras in Paris and Rennes, as well as with the Lyon Opera House Orchestra.

ECMA members (European Chamber Music Academy) since 2018, they regularly receive the teachings of Hatto Beyerle, Johannes Meissl, Patrick Jüdt... The Trio also benefited from masterclasses with the Wanderer Trio, Emmanuel Strosser, Yovan Markovitch, Gary Hoffman, Christian Ivaldi, Guillaume Sutre, Kidon Kremer, the members of the Ebene, Talich and Modigliani Quartets… In March 2018, they were counseled by Gautier Capuçon on the Triple Concerto during a masterclass at the Louis Vuitton Foundation in Paris filmed by Medici.tv.

Raphaël plays a cello of Frank Ravatin generously loaned to him by the association El Pasito.