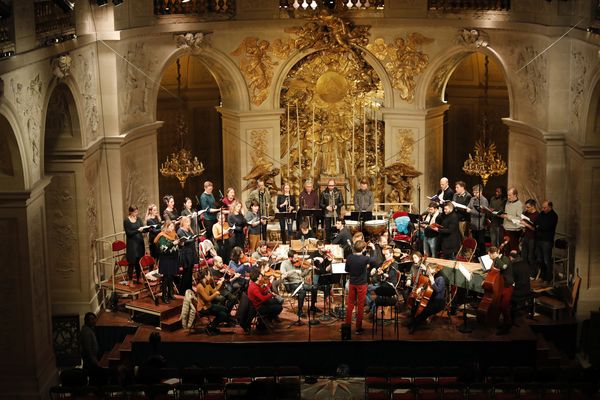 Founded by Valentin Tournet in 2017, La Chapelle Harmonique is the product of the union between a choir and a period-instrument orchestra. Its repertoire, mainly focused on Bach work, goes from Renaissance polyphonies to Baroque of Enlightenment.

The first project of the ensemble dedicated to the rediscovery of an unknown version of Bach St John Passion, took place in the royal chapel of Versailles in the outline of the Palace of Versailles season in March 2017 with the support of ADOR – the Friends of the Royal Opera.

The initiation of a Bach cycle and a work around the Spanish Golden Age are among the projects of the ensemble for the next coming years. Joan Cererols and his catalana masses with double and triple choirs will be in the spotlight of the first part of this project.

The first recording of La Chapelle Harmonique is devoted to Bach Magnificat (Christmas version) and was released in 2019.

La Chapelle Harmonique is in residency at the Festival d’Auvers-sur-Oise (2018-2020) and at the Fondation Singer-Polignac.