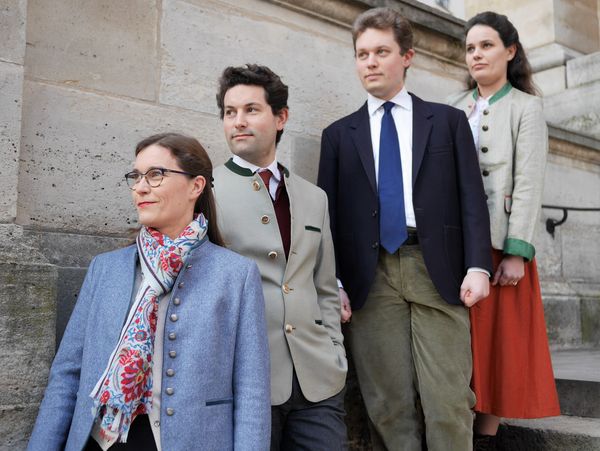 Has been in residency since 2011, became Associate artist in 2017

Composed of members of one large family, the Girard Quartet was born of a shared passion brought to life by family performances of chamber music from a very early age.

Trained by the Ysaÿe Quartet at Paris’s Conservatoire Régional and then by Miguel da Silva at Genève’s Haute Ecole de Music, the Girard Quartet were learning at the same time from some of the greatest quartets at the European Chamber Music Academy, the Académie musicale in Villecroze, Proquartet, and Aix-en-Provence’s Académie du festival, quickly making a name for themselves at several important international music competitions. Winners of the Prix Académie Maurice Ravel in 2010 at the Saint-Jean-de-Luz festival, the Quartet were also prize winners at the Concours de Genève in 2011, and followed this by winning awards from the Fondation Banque Populaire and the HSBC Académie du Festival in Aix-en-Provence.

Guests in many prestigious concert halls and festivals in France including the Auditorium of the Musée d'Orsay and the Théâtre du Châtelet both in Paris, Nantes’s La Folle Journée, Arles’s Soirées et Matinées musicales, the Deauville festival, and La Grange de Meslay, the Quartet are also sought after on the international scene, notably in London’s Wigmore Hall as well as in Switzerland, Italy, Belgium, Morocco, Russia, China and Japan.

In residence at the Queen Elisabeth of Belgium’s Royal Chapel, they benefited from close contact with the Artemis Quartet. They are also supported by the Singer-Polignac Foundation : their complete set of Beethoven quartets, performed on the eve of the 250th anniversary of the composer, will remain for the Girard Quartet as a major and determinant adventure in following their artistic journey.

Regular broadcasts on France Musique, Radio Classique and Musiq'3 allow the Quartet to share with a large audience their precious musical projects.

The Quartet combine their concert activities with an ongoing drive to make their music available to audiences of all tastes. With this in mind, they have already established joint ventures with several primary schools and music schools.

In 2018 he created an Academy for children "Les clefs du bonheur" and in 2020 he founded, between music and terroir, the Provencal festival "Rosa Musica".

The musicians play four instruments which were made between 2014 and 2016 by Charles Coquet, the Parisian maker of stringed instruments.